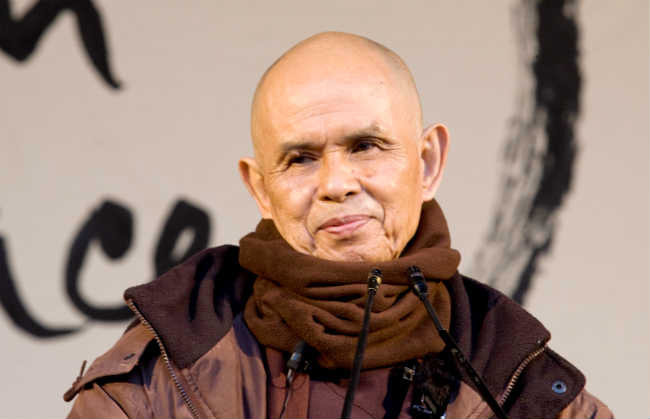 Thich Nhat Hanh (known as “Thay” by his students) is a Vietnamese Buddhist Zen Master, poet, author and peacemaker who was nominated by Dr Martin Luther King, Jr. for a Nobel Peace Prize in 1967. Born in central Vietnam in 1926, he became a monk at the age of 16. In 1966 at the age of 40, Thay was exiled from Vietnam because of his commitment to peace. The exile lasted 39 years. A model of “engaged Buddhism”, he now lives in Hue, Vietnam at his root temple (updates on Thay's health).

In the short video below Thay talks about the breath bringing us back to the present moment.

As stated on the web site Thich Nhat Hanh Audio:

All phenomena rely on Oneness, what does Oneness rely on?

Thay then traces all the teachers through the generations and how they each received their name from a gatha of Zen Master Lieu Quán. The classical Chinese characters of the gatha represent the name given to each of the generations.

The English translation of the gatha is as follows:

The great way of Reality,
Is our true nature’s pure ocean.
The source of Mind penetrates everywhere.
From the roots of virtue springs the practice of compassion.
Precepts, concentration and insight -
The nature and function of all three are one.
The fruit of transcendent wisdom,
Can be realized by being wonderfully together.
Maintain and transmit the wonderful principle,
In order to reveal the true teaching!
For the realization of True Emptiness to be possible,
Wisdom and Action must go together.

Students of Thich Nhat Hanh are encouraged to memorize this gatha.

Updates from Plum Village
​​You are welcome to join our online meditation practice!
Powered by